Calling all developers: Participate in the TriMet data hackathon June 25,2014 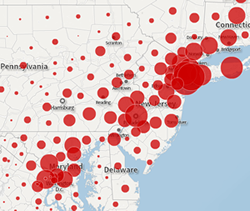 U.S Census Bureau  has introduced Census Explorer a new online tool that displays demographic information on maps of states, counties, and neighborhoods. The Bureau has also  released the new commuting edition of the interactive map Census Explorer, which gives Web visitors easy click-and-zoom access to commuting statistics for every neighborhood in the U.S. It also shows how commuting has changed since 1990 at the neighborhood, county and state level — including how long it takes to get to work, commutes longer than an hour, and number of bikers. Census Explorer includes not only the latest American Community Survey five-year statistics (2008-2012) but also information from the 1990 and 2000 censuses. County Business Pattern data are available for 2000 and 2011, for both states and counties.

The topics currently available in are people, education and  income.

To make new discoveries about your neighborhood  and for further information please click here.